The rectifiers, also called simply diodes, are devices designed to have only one direction of significant conduction, said forward-bias, otherwise when they are working in reverse-bias the conduction is insignificant as long as the voltage value is not exceeded a voltage value called breakdown.
We call rectifier diode any diode used to presents reverse breakdown voltage always greater than the inverse voltage of the power supply. And the function of these diodes is in the final analysis to block any inverse current to the diode conduction.
You consider the following classification of rectifier diodes (bearing in mind that some diodes may also fall into several categories):

The diode can be considered as a particular case of non-linear resistor. Although the device category of nonlinear circuits is very wide and requires generally methods of investigation of considerable complexity, the most important diode circuits in electrical and electronic applications do not always require excessive conceptual complications for their understanding. There are different categories of diodes, among these the most significant are:

See the simple circuit in figure, there are three circuit elements: the resistor, the electric generator and the ground, in addition to the connecting wires.
If you want to use the circuit already built, you can save this PNG image and load it with Multisim 14 or later using File > Snippets > Open snippet file. 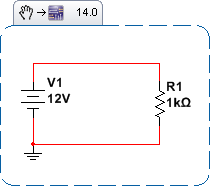 Let's analyze them in detail. The generator in our case is a battery that provides DC voltage; the voltage of a generator, also known as electric potential difference, is measured in volt [V] and in this case it is worth 12 V. This generator is a bipolar component because it has two terminals. Generators are part of the so-called active components (provide energy).
The resistor is also a bipolar component and the electrical parameter that characterizes it is the resistance. It is measured in ohm [Ω] and in our case it is 1 kΩ. The resistor is one passive component because it consumes energy.
The third element characterizing the circuit is the ground. It is not a component but rather a symbol inserted in the circuit to indicate a point of zero potential.

What can we expect from this circuit? There is an electric potential difference provided by a generator, inserted in a closed circuit (the path of the wire starts from the positive pole and closes to the negative pole) so you can expect a current to flow inside!
Before you see if it is true, it is better to check that there is tension. To do this we should connect a voltmeter between the + and - of the generator, as shown in the figure to the side. This is called a parallel type conection. Multisim confirms that there is voltage and it is useful to note that this voltage is the same for the resistor. We can see that the generator, resistor and voltmeter are in parallel, so we can conclude that several parallel elements all have the same voltage. 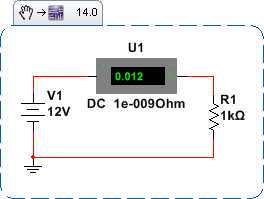